I have to admit, its my fault that we haven’t been posting as often lately. Mostly because we’re caught up in a million projects that are all 3/4 of the way complete. Others are completed, but I may or may not have forgotten to take “after” pictures before covering up our hard work (aka our floors, which are currently covered up, as we’re in the midst of painting). Can’t wait to share that one. But I digress.

The dungeon that was our basement came with a small perk – a full bath. And while the bones were there, we knew from the beginning that it was a total gut job. As in, tear down the walls and start from scratch.

And that’s exactly what we did. I’m pretty sure I referenced this tear down in one of my early posts, and also mentioned that my brother oh-so-politely commented on the fact that we were just “breaking stuff for fun.” Yes and no. Yes, it was fun to break stuff. But no, it wasn’t just for fun.
The plan was to leave all the plumbing in its place, but to expand the basement landing, making way for a mud room. And that we did. We also bumped out a section of the bathroom to allow room for an Ikea storage cabinet that Dan’s had his eye on for quite some time.
We (and by “we” I mean Dan) came up with a light and airy design, hoping to brighten up the space and make it feel more apart of the home, and less basement-like. We went with floor tile that looked like wood, since the rest of the house has hardwood floors, and it was the color stain we would aspire to when refinishing them ourselves (more on that later).

The rest followed a gray, white, and blue color scheme. You’ll soon notice that the majority of our house is based on these three colors. We’re just kind of hooked on that at the moment.
We updated the existing shower with white subway tile, the same that’s used in the upstairs bath. The floor tile in the shower is a pretty hexagon marble that mixes in a bit of blue.

Going into this remodel, we were dead-set on a pedestal sink. We love the look of them, and thought the traditional feel would fit in perfectly with the house. Unfortunately, halfway through the renovation, we were let down. The existing plumbing wouldn’t accommodate a pedestal sink – or it would, but it would look awful, since we wouldn’t be able to hide any of the pipes. So back to a white cabinet with white carrera marble we went. Not what we initially had in mind, but it still looks great, and we still love how it came out.
A pretty succinct write-up for a project that took over a month, but in the end, we finally had a functioning bathroom and a space in the basement that feels like the rest of the house. 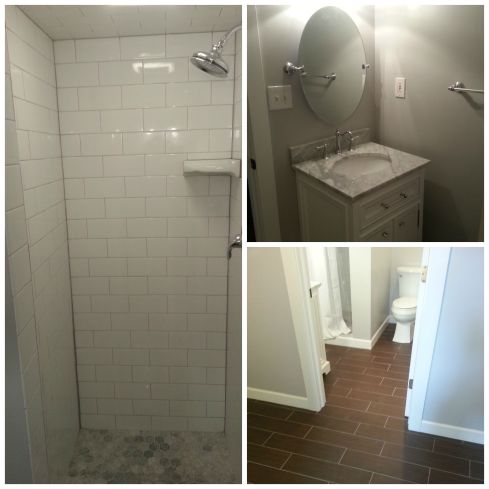 2 thoughts on “Bathroom Reno: Part I” 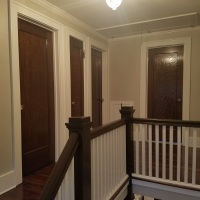